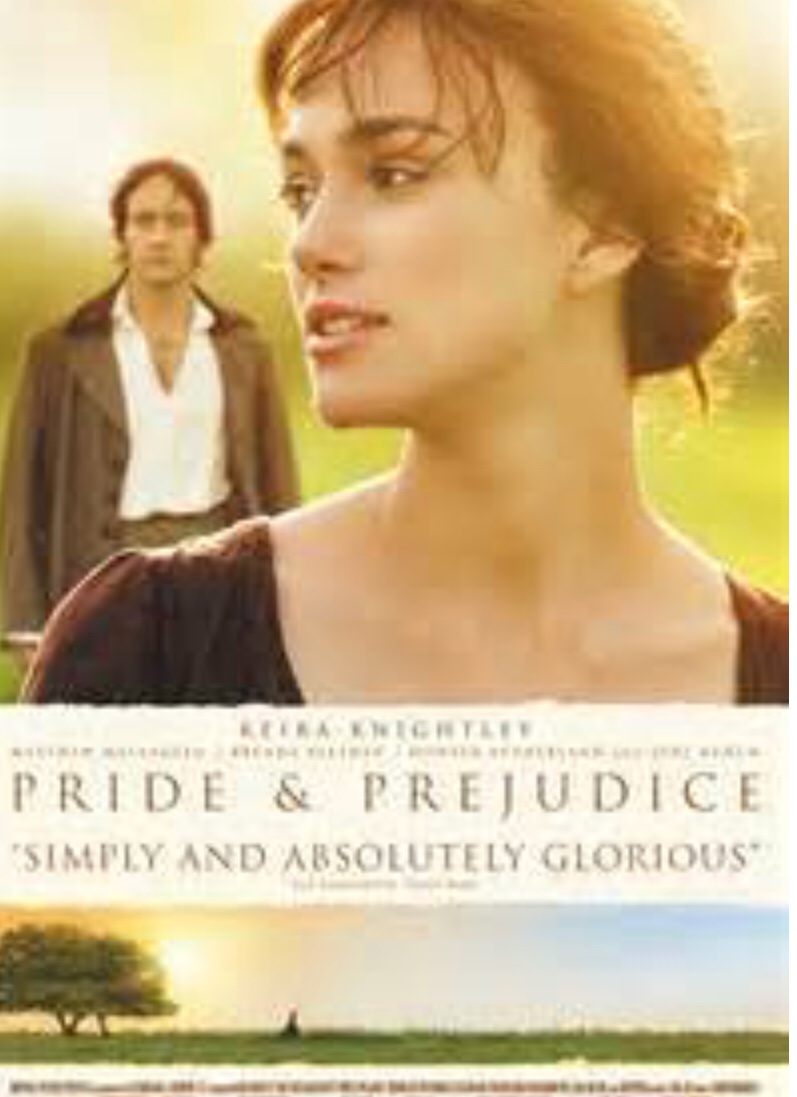 It is Sunday evening, the kids are in bed, it is my time to relax and unwind. I might take some time to write my blog as I am doing now, I might read some books, have a bath or just watch a bit of tv.

This evening, I am going to continue in my celebration of literature but veering away for one briefest moment to talk about adaptions. Ah yes, I hear you cry but how is this related to literature. Well. I think a good film or tv adaption can still tell a good story, and it may tell a story to someone whom might not ever had the chance to read a book, and sometimes it may encourage people to read the original book/script/poem that inspired those adaptions. As much as I love a good book, and you all should know by now, I really do. I am also not ashamed to admit I do like a good bit of tv too. And this counts for my favourites too, often I like the book better and I wouldn’t choose the tv/film over the book but I do still enjoy them, and on very rare occasions I quite fall in love with it even more so, because of the film or tv series. Pride and Prejudice is one of those such things. The more books I read, (sequels, based on, spinoffs), or tv mini series or films I see, the more I fall in love with the characters and love the original even more.

So for now, here is my run down of my top adaptions/spins off/ sequels; lets say “Pride and Prejudice” adjacent list:

This British-American romantic comedy based on a novel by Shanon Hale is a funny, slapstick parody of Pride and Prejudice. I am not sure it is meant to be but that’s how it comes across. From Jennifer ‘Stiflers mum’ Coolidge’s funny turn as a very stereotypical American lady to the haughty Mr Darcy character, it is all a lot of fun and laughs, very bright and comedic. Possibly not the best adaption to ever grace the screens but still worth a watch.

The film is centred around a thirty something American, Jane Austen obsessed lady, favourite being the bbc mini series starring Colin Firth, it seems as though she confuses reality with imagination, and is expecting her own love life to be similar to a novel, but hasn’t really thought through how life would actually be like in an Austen novel.

After another failed relationship and her house starting to resemble an Austen novel. In an attempt to get her to sort her life out, her friend suggests she try one last thing to get herself a Mr Darcy and then she must quit with the obsession. She spends all her savings on a trip to Austenland: A Jane Austen themed holiday resort in England.

The guests have paid for varying packages but all should get an escape from 21st century modern living and transported back to regency era England. All the guests are given pseudonyms, regency dress and attend various different activities. Our main character befriends a wide variety of people, and it soon becomes apparent the cheapest option, which she could afford does not give her the same luxuries as everyone else. But she is determined to make the most of it, as one of the guarantees at the end of the holiday is romance at the ball.

The resorts wealthier guests, on the platinum package are all rather silly and overact and swan around, well, flounce around making up words half of the time, but it’s silliness is rather funny, and all part of the general feel of the film. Without giving much away, there is a Darcy and a Wickham character lots of cute little tippets of Austen thrown in, so it gives just enough Austen to be on this list, but is still rather silly.

Overall, it is not a classic and will not be everyone’s cup of tea, but if you’re looking for a fun, easy watch, with little bites of Austen, this could be for you.

I can hear you all silently judging me for putting this quite low on my list, but as an Austen fan and a lover of the mini series, this film didn’t really do it for me. It’s not awful, and it has so,e wonderful scenery and I love some of the filmography of it, but as far as adaptions go, I personally don’t believe it is the best. I love Kiera Knightley, I think she’s really good in some things, but she didn’t sell the admirable, complexity of her character for me. She was just a bit, well, meh! 😕 But in that same regard Mathew MacFadyen didn’t really give me amazing Mr Darcy feels either, although there were moments where I definitely could have fallen in love with him, I think! 😀

I loved the music, and landscape and the general sweeping of scenes, but something in this version is just, a little flat for me. Overall, it is a wonderful story and I think it was going to be successful as it comes from a great source, and I thoroughly enjoyed it and have and will rewatch it, but again not my favourite.

Taken from an adaption of the book of the same name, it is not a direct Pride and a Prejudice adaption but has many characters resembling certain characteristics in P&P and is a close enough link to allow myself to include it, as I actually quite enjoyed the book and film.

It is not at all an accurate adaption of any of Austen’s book, but as we get to know the characters, we get to see which is their favourite book, why they like it and often how their relationships resemble a modern take on the relationships featured in Austen’s novels. This is the reason I love this “adaption”, some people will say an Austen novel will provide nothing for a modern generation of lovers, but I beg to differ. We all have essences of traits that many of the leads in the Austen’s novels have. I think taken in exact context of a Regency time, you are correct, none of us could take it to heart. We don’t have dowry’s upon us, and women don’t have to marry to survive in life, however we do sometimes need to overcome our own pride and vanity, like Elizabeth and Darcy, or make promises when are young and don’t know any better that we will struggle to keep as grown ups, a la Edward Ferrars. And who hasn’t tried to set up friends, or put our noses in other people’s business without appreciating whether they want it or not, much like the heroine of Emma.

For me, this book/film isn’t a literary/cinematic masterpiece, but it does bring Austen into a more modern context without, the comedic, sometimes silliness other books/films have included.

I am never quite sure how I feel about this adaption. Catch me on some days and I love the modern girl stuck in another time aspect, and it would appear higher on my list. Other days, It doesn’t do it for and it ends up further down my list of favourite adaptions.

Lost in Austen is about a modern Austen lover who finds she has a link via her bathroom to the world of her favourite novel Pride and Prejudice. Elizabeth Bennet wanders in and decides to stay. Amanda decides to live out her fantasy in the novel for a bit but when characters start acting up and changing the story, Amanda has to decide what she is going to do to fix it.

I do really love the idea of taking a modern character and a regency character and swapping them out, to live in the opposite worlds. It was a genius idea, and the casting was on the whole really good. I like that once the main character of Elizabeth abandoned the story, the other characters all became very different and the story took some very different turns. So I can’t quite put my finger on why sometimes, it doesn’t work for me. I think, and this is my most shallowest part of me coming out – I wasn’t a fan of Elliot Cowan as Mr Darcy. I am a huge fan of Austen and mostly in part because I fall in love with her characters and as with most people, Mr Darcy holds a special place in my heart, and unfortunately in this adaption, I didn’t! I think it might be as simple as that.

What can I say about this adaption? I loved it, not just because it’s an adaption of one of my favourite books, but because it really hit its target audience. From initial idea to delivery, and social media engagement during its run, it really established a niche for storytelling to a modern generation. When blogging/blogging/social media is at its highest, it was remarkable to use this to provide a classic for a younger generation.

This adaption is a web series centred around a young university student Lizzie Bennet, her sisters Jane and Lydia and best friend Charlotte. There is of course, a Bing Lee and. a Darcy and all your other favourites. Each webisode is 2-8 minutes long, and most action happens off screen, we just hear all about it through these vlogging monologues/dialogues between Lizzie and her pals.

Lizzie is a mass communications student, living at home with her parents and shy Jane and party-going Lydia. Bing Lee is a wealthy medical student, with even wealthier friend in William Darcy. Childhood friend Ricky Collins provides the catalyst of Mr Collins and after Lizzie turns down his proposal for business partner, takes Charlotte as his business partner instead. Lizzie vlog starts as a thesis for her degree, but it son becomes a huge part of her life and everything gets recorded, thus causing some drama and creating opportunities. The big question, will it stay true to the novel is adapted from and all end happily?

If you can stomach the short episodes, and having to hear about a lot of the action it is worth a watch, I think if you’re from the ‘you tube’ generation, it is definitely worth a watch and hopefully will inspire you to give the book a go, if your a huge fan of the original and more period drama versions, perhaps give this one a miss. I really enjoyed it.

It is now Wednesday evening and I am half way through my run down for my favourite Pride and Prejudice adaptions. Have I included one of your favourites yet? Or are you still waiting to see if you’d will appear on my list?

What did you think of the ones I have suggested so far? Have you seen them all? Let me know in the comments section what you think?

Find The Weird and Wonderful